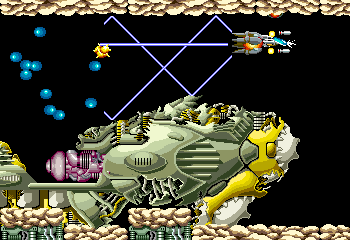 "Light Amplification By Stimulated Emission of Radiation (and it ricochets off hills, too!)"
— Description of the Laser ability, Kirby & the Amazing Mirror
Advertisement:

We're all aware that lasers reflect off mirrors. But some writers and video game creators apparently think that lasers can reflect off any flat surface. These bright flashing streams of light — or sometimes, Pure Energy — can hit anything from a stone ceiling to a grass-covered field and rebound at the same angle at which they hit.

In video games, they will also be the "slow" variety of laser, so that the player can watch them bounce off each surface in turn, and dodge them just as they rebound toward him. If the player has access to the weapon, expect several Trick Shot Puzzles whereby the player has to bounce a single shot off a series of surfaces to hit a distant switch or enemy.

A Sub-Trope of Ray Gun. See also Pinball Projectile. Cousin trope to Mirrors Reflect Everything and Attack Reflector. Can be a form of Hoist by His Own Petard.