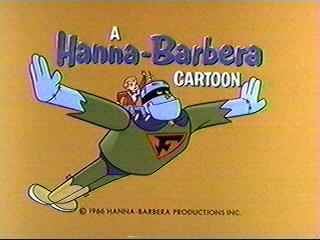 Produced by Hanna-Barbera for CBS in 1966, the same year as Space Ghost, Frankenstein Jr. was a gigantic, sentient Do-Anything Robot built and commanded by boy scientist Buzz Conroy. Their base of operations was a mountaintop laboratory run by Buzz's father.
Advertisement:

While Frankenstein Jr. held the first part of the title, he shared his show with The Impossibles, who had two segments per show while he only had one. Frankenstein Jr. and the Impossibles was one of the last H-B series animated in the classic Ed Benedict style (which often contrasted with the episodes' plots, which were usually played more seriously).

He and Buzz were also featured in DC Comics' recent Hanna-Barbera crossover limited series, Future Quest, as well as in Scooby-Doo! Team-Up alongside The Impossibles.

Not to Be Confused with Frankenstein Junior, a Market-Based Titlenote  (in Italy for those curious) for Young Frankenstein.