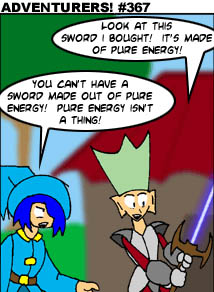 Energy is formally defined as the capacity to do work (whilst work is defined as an action displacing an object by applying a force). Energy is not something you can, for example, pick up and put in your pocket.

But the famous E = mc2 equation gave us a notion that matter and energy were interchangeable in a certain way, and, as they tend to, science fiction writers went off half-cocked with the idea. The funny thing is that in Physics, everything is made up of energy

. Mass is also just a form of energy, so basically everything you see, you pick up and hold onto, is pure energy. Just not in the sense of this article.

You will therefore find the notion in quite a lot of Speculative Fiction that energy is just another form of matter, rather than simply a property of it— particularly, a sort of warm glowy kind of matter, whose exact properties can be fine tuned to user specifications, and which can be summoned or banished with a button-press.

In this sort of system, you can treat "Pure Energy" as a building material, and make things out of it. Such things would, quite naturally, be of higher quality than anything made out of mundane old matter. In the universe of real physics, claiming something is "made out of pure energy" is flat out nonsensical — it makes as much sense as saying you can make a car "out of pure velocity," or make pasta "out of pure yummy".

If we're feeling generous, we can suppose that they don't really mean to treat energy like a kind of matter, and are actually dealing with highly energized exotic matter, such as plasma, certain created energy sources or Phlogisticated Aether, but they really shouldn't be going around calling it "Pure Energy".

Misinterpreting the law of conservation of energy — "energy cannot be created or destroyed" — to mean that objects made of "Pure Energy" are indestructible is a common subtrope. Of course, if "energy cannot be created", then we're left to wonder how, according to this subtrope, "Pure Energy" came into being in the first place. Or why the same rule doesn't apply to stuff made of Pure Matter (as the actual LoC does). note One source of confusion here is that in laws of conservation, "destroy" means, more or less, eliminate entirely from reality. In everyday usage, though, it simply means "dismantle into lots of tiny bits" — even if you think you eliminated the thing from reality. When you "destroy" a piece of paper by setting it on fire, you're not violating physics, because that's a different sense of "destroy". The paper no longer exists as "paper", but as lots of molecules that used to be connected as "paper". In the sense of the LoC, fictional characters indeed have no hope of "destroying" a Pure Energy object, but they don't have any hope of destroying a basketball either — only of (in either case) breaking it down into lots of tiny bits.