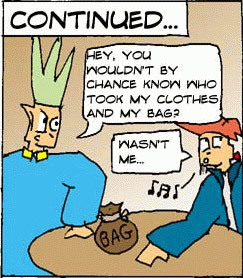 "You're a secret agent man
Who's after the secret plan
How do you act so they don't know you're a spy?
Ah-normally (whistle) Normally (whistles again)
Normal... L-Y!"
— Tom Lehrer, "L-Y"
Advertisement:

In media of all types, especially comics and cartoons, the "innocent" whistle is a main staple, often played for humor. Alice, feeling mischievous, decides to, say, throw a snowball at Bob. Bob is knocked off his feet. He pulls himself up and spins around to see no one around in the area but Alice, who puts her hands behind her back and lifts herself up onto her tiptoes and back down several times while whistling. Sometimes Alice would be also be twiddling her thumbs, point her eyes upward/away, putting her hands in her pockets, or a halo would appear above her head — or any combination thereof. In comics, usually only a single note symbolizing the whistle is written. The Not-So-Innocent Whistle can also happen after suppressing a traumatic moment, or any other instance of hiding something.

Common ways the trope is applied:

A Dead Horse Trope, given the large number of Genre Savvy characters who point out that whistling for no apparent reason is a surefire method to give yourself away. Not to be confused with the wolf whistle. An "Oh, Crap!" Smile or an Eyelash Flutter are alternatives in this kind of situation.

A staple subtrope of Acting Unnatural and Looking Busy.

Alternative Title(s): Not So Innocent Whistling