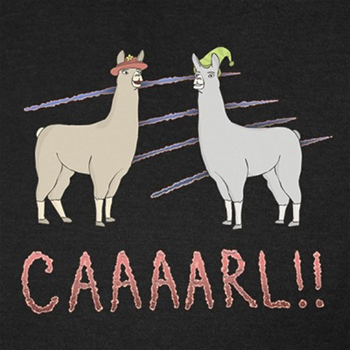 All the fun of llamas, but with the added comfort of hats!
"I do not kill people. That is— that is my least favourite thing to do."
Advertisement:

is an animated web series created by Jason Steele of FilmCow that ran for four episodes from 2009-2010 as a fun and well-received Dark Comedy, then later revived for a further eight episodes from 2014-2015 that turn the show into something much darker.

The original series featured two llamas, both wearing hats. One of them (the sane and logical Paul) accuses the other (the murderous and in-denial Carl) of committing a monstrous crime. Carl's crimes become more grandiose with each episode. A fifth episode was planned, but cancelled when fans easily predicted the joke.

As detailed in this spoiler-heavy analysis from the creator himself

, the show's revival came about when he had an idea for a legitimately surprising fifth episode and decided to extend the idea into a fully-fledged, eight-episode story arc that would deconstruct the show's comedy with a sense of dark meta-humour as the viewer became privy to Carl's tormented, self-destructive psyche. Being inherently less funny, the revival was at first panned by some fans as an attempt to cash-in on the earlier episodes' success, but this faded as the series reached its climax.

Llamas with Hats provides examples of:

Congratulations, Carl! You have destroyed all life on Earth! ...Now what are you gonna do?

Congratulations, Carl! You have destroyed all life on Earth! ...Now what are you gonna do?