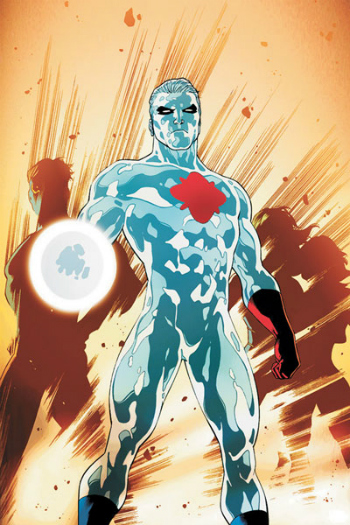 "My name is Captain Atom. As in A-bomb. As in nuclear fission. As in... the End of the World."
— Captain Atom, Captain Atom: Armageddon
Advertisement:

A Charlton Comics superhero who got incorporated into the DCU following Crisis on Infinite Earths.

The original Charlton Captain Atom was Allen Adam, created by writer Joe Gill and artist Steve Ditko. He first appeared in Space Adventures #33 (March, 1960). Allen was a scientist in the United States Air Force who was working on an experimental rocket when it was accidentally launched. The rocket exploded in midair, taking Allen with it - but he reformed again on the ground, having somehow acquired superpowers in the explosion. Naturally, he put those powers to use as a superhero. The character regularly appeared in "Space Adventures" until its issue #42 (October, 1961). Then held his own magazine from December, 1965 to December, 1967. A small number of new Captain Atom stories appeared in anthology titles of 1970s and the early 1980s.

When DC Comics bought the Charlton characters, and brought them into the DCU, they gave Captain Atom his own ongoing, written by pre-Gargoyles Cary Bates and Greg Weisman. Starting on March, 1987. This series rebooted Captain Atom from the ground up — a new character with a new origin and new powers. The Post-Crisis Captain Atom was Nathaniel Adam, a captain in the USAF, court-martialled for a crime he didn't commit. He was given a choice: a death sentence, or participation in a potentially fatal experiment — sitting at ground zero of a nuclear explosion encased in an alien metal, in the hope of testing the metal's properties. Survival would mean freedom. Nathaniel chose the experiment. The explosion didn't kill him; what it did do was bond the alien metal to his flesh, giving him superpowers, and throwing him twenty-odd years forward into the present day. He found himself able to access the 'quantum field' that underpins reality to produce a variety of effects.

So far, so expected. Where Captain Atom diverged was that Nathaniel had been a member of military intelligence, and was pressed once more into service for them as a deep-cover agent, as the new government refused to fulfill the promise of the previous government. His cover identity was that of a superhero, the Charlton adventures presented as his fake backstory, but in reality, he was working for the government. The course of the ongoing saw Nathaniel try to discover the truth behind his original frame-up, attempt to establish his freedom from his superiors, and slowly become the hero he pretended to be. He also joined up with Justice League International, initially as an agent, but going on to serve as a hero.

Then Executive Meddling intervened. Captain Atom was intended to become Monarch, villain of Crisis Crossover Armageddon 2001; as a result the ongoing was canceled in September, 1991, after a five year run. News of Monarch's secret identity leaked out, and in order to ensure that it remained a secret, C-list hero Hawk was chosen to become the villain instead. Atom was seemingly killed in the battle (since he was also set to be written out of JLI) but actually both he and Monarch were sent back in time in a miniseries called Armageddon: The Alien Agenda. Upon returning to the present, he led the Justice League spin-off Extreme Justice and later joined an all-Charlton team called L.A.W. None of his post-Monarch appearances really caught on, however.

It was some while before Captain Atom returned to the spotlight in Captain Atom: Armageddon (2005-2006), a nine-issue miniseries that saw Nathaniel trapped in the WildStorm universe, trying to find his way back to the DCU. He finally made it... but unfortunately, he was just in time for a Face–Heel Turn, becoming Monarch for real in the run-up to Countdown to Final Crisis. Monarch was eventually defeated in the course of Countdown, disappearing from sight.

Captain Atom resurfaced in a backup feature in Action Comics, making a Heel–Face Turn back to heroism, and slowly regaining his true identity and memories. He then went on to appear alongside his former JLI colleagues in Justice League: Generation Lost, as they attempted to track down a resurrected Max Lord. He also showed up in Young Justice as a background member of the Justice League in the first season, becoming its leader in the second season while most of the team is in space.

A new Captain Atom ongoing was one of the titles in DC's New 52 relaunch. However, it didn't last too long before being cancelled. As part of DC Rebirth, Captain Atom has received his own mini-series called The Fall and Rise of Captain Atom. It reintroduces the character for Rebirth while explaining his absence between that and New 52. It also reunites Cary Bates and Greg Weisman with the character.

Cap's most famous Expy is Doctor Manhattan of Watchmen. Not surprising then that when the good captain tends to show up in modern media, he frequently borrows a few aspects from the Doc.