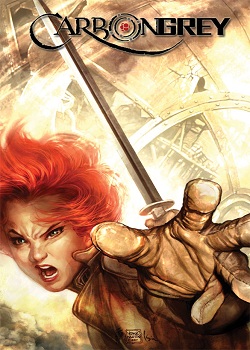 The story revolves around four sisters, Eva, Anna, Mathilde and Giselle. They are known as the sisters of the grey, descendants of Gottfaust, a legendary hero who gained the ability to reshape the world after a rock from a fallen star was lodged into his chest. For over 300 years Gottfaust and his descendants have protected the kaiser, ruler of the Prussian Empire, Mitteleuropa. In each generation three sisters are born, one for strength, wisdom, and grace. That changes with the birth of twin sisters Mathilde and Giselle. Both sisters are considered half-greys and flawed. Giselle is disobedient and stubborn while Mathilde does not possess the physical perfection of her sisters. Despite their flaws, one of these two is the thriteenth sister, the carbon grey, prophesied by Gottfaust to bring about a renaissance and restore the nation to its former glory.

It's 1913, the start of the industrial age and there's a great war between the Axis and Allied powers. This war is actually a diversion set in motion by the Kaiser's wife, Queen Raisa Vasilyeva. She wants to harness the power of Gottfaust's stone, and plans to manipulate Mathilde to turn against her sisters to do so. While on Giselle's watch, the Kaiser is assassinated and all evidence points to Giselle as the culprit. Giselle, now on the run from her sisters, who want answers, and other enemies, must travel across Mitteleuropa into enemy territory to deliver a letter to the supreme commander of the allied forces and uncover the true meaning of Gottfaust's prophecy before Queen Raisa Vasilyeva uses the stone to rewrite history.