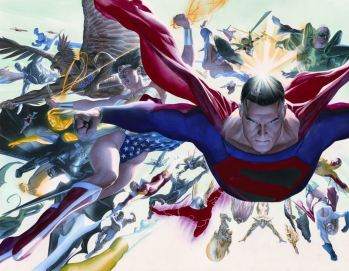 Pretty awesome.
"According to the word of God, the meek would someday inherit the earth. Someday. But God never accounted for the mighty."
— Norman McCay
Advertisement:

A DC Universe and Elseworlds graphic novel, published in 1996. Written by Mark Waid and beautifully painted by Alex Ross, Kingdom Come depicts a dystopian future in which Superman has retired due to the public's preference for heroes who will use lethal force. The Silver Age superheroes followed him, in some cases retiring completely, in others sticking to their own small areas. With the absence of the old heroes and the abundance of a new, more reckless generation, the world has become a bit grimmer, a bit more pessimistic and hopeless, but nevertheless seems to keep turning.

That is, until a tragedy strikes in Kansas. The death of Captain Atom causes a nuclear explosion that destroys most of the American Midwest. This loosens the last bounds of restraint among the new generation of metahumans, who begin to fight one another with abandon. Superman returns, reassembles the Justice League and tries to take back control, with dire consequences.

Through it all, a simple pastor named Norman McCay, the minister of an elderly Wesley Dodds (the Golden Age Sandman), is guided by apocalyptic imagery drawn from the Book of Revelation and by The Spectre. He must decide the fate of humanity - whether to allow the metahumans to be killed en masse and save the rest of humanity, or to allow them to survive, but doom the world.

This series was followed by The Kingdom, which introduces the concept of Hypertime by having the Kingdom Come future superheroes fight alongside their present-day mainstream continuity counterparts, and Thy Kingdom Come.

Unusually for a graphic novel, Kingdom Come also has a full Novelization by Elliot S! Maggin, which expands slightly on the comic's events and is generally considered to be at least as good if not better than the highly beloved graphic novel itself.

Although no animated adaptation has been made (and likely will never be, due to Warner Bros considering the art style of Alex Ross too hard to replicate), several elements of the comics have made it to live-action:

open/close all folders
A-D
E-H
I-L
M-P
Q-T
U-W
X-Z
They won't forgive you for this, Clark. Forgive yourself.