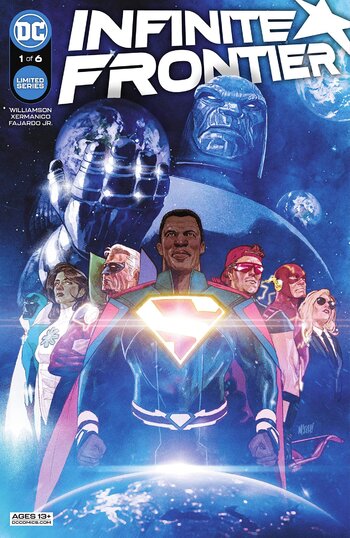 Infinite Frontier is a six-issuenote issue #0 was released in March, but only one part of it is connected to the series proper, and it was intended as a springboard for DC's entire line limited series that began in June 2021 as part of the eponymous DC Infinite Frontier relaunch, written by Joshua Williamson and drawn by a variety of artists. It is the first part of the "Infinite Frontier Saga".

Following the events of Dark Nights: Death Metal, the multiverse has been restored as the 'Omniverse'. However, every world has been made aware of the multiverse. Some are frightened by this new awareness, while some seek to exploit it for their own gain.

Justice Incarnate, the multiversal Justice League, seeks to discover what has happened to the multiverse and combat any rising new threats. Some of the dead have returned but not all; some histories have been restored but some have not; and a new threat emerges on the newly discovered "Earth Omega" after the return of Darkseid, now more powerful than ever.

The series was followed by Justice League Incarnate.

Tropes applying to the series: