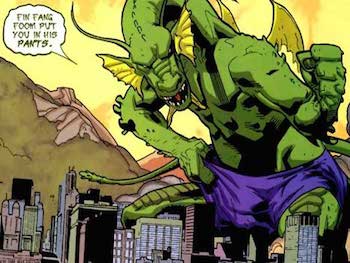 ...even though he has absolutely no genitals whatsoever.note And he shops from the same tailor Bruce Banner does.
Sean: Look, Wolfman doesn't go to work, he's not like a "guy."
Patrick: What are you talking about? He walks around, he wears pants...
Sean: He had to wear pants. See, those movies were made in the 40's! He had to wear 'em so you wouldn't see his... wolf-dork.
Patrick: Wolf dork?
— The Monster Squad
Advertisement:

Monsters are fun. Whether it's a demon, genetic freak, lab accident, or just some kind of alien that happens to look really monstrous, the creators want to show this monster in all its glory. This means they will wear as little as possible to really let the audience see how, well, monstrous they are. Of course, they usually can't get away with a naked monster running around, but they want to avoid Nonhumans Lack Attributes for whatever reason. What do they do instead? Why, they'll slap on a Loincloth, pair of briefs, or maybe just some pants. The monsters in these situations are almost always sentient but decide to run around wearing as little as possible, rarely with anyone saying anything.

This becomes really inexplicable when you have a Reluctant Monster character who is horrified by the way he looks. One would think he would want to cover up, but he doesn't.

Sometimes, if a person is transforming into a monster, they may have Magic Pants, invoking this trope. Other times they may have strategically growing natural moss or plants. Often overlaps with Walking Shirtless Scene. This rarely happens to female monsters, but if it does, expect it to have at least a little Fanservice along with it.

Usually, this trope is found in comic books.

Contrast with Exposed Extraterrestrials and Nonhumans Lack Attributes. Not to be confused with Monster Delay, where a monster seems oddly modest about appearing in front of the camera at all.