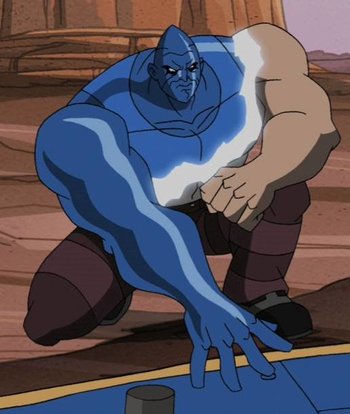 "What, you're gonna stop me by tossin' concrete? So congratulations. Now I'm concrete. Now what?"
— The Absorbing Man

A character or object can change itself into a material simply by touching that material. Most often seen with metal and stone, but sometimes seen with rubber, wood, or other materials.

Characters with this ability need to be careful what they choose to use their powers on. Sure, pummeling your enemy with stone fists is great, but if you accidentally turn into paper or ice, you're going to have a bad time. Their foes might try and use this to their advantage and induce Assimilation Backfire. It also requires some ability to think on one's feet to find a useful substance to turn into. Alternatively, maybe they carry around small objects so they always have useful transformations available.

Just like Chameleon Camouflage, this can be done for camouflage purposes.

Related tropes include Cannibalism Superpower, The Assimilator and Power Copying which are about absorbing the powers of other characters rather than materials. See also Elemental Armour, where the character is only encased by the substance without transforming. Contrast The Magic Touch, where touching causes the object to change as well as Taken for Granite, where the transformation is against the victim's will and freezes them.