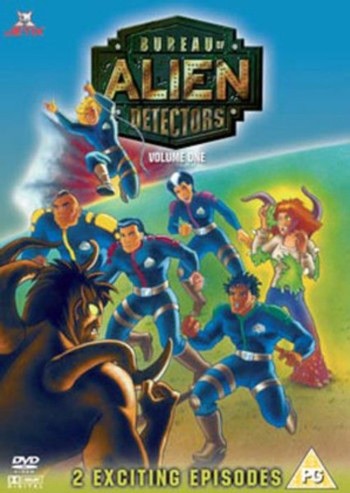 "To many, it is modern day folklore. To others, it is simply tabloid headlines. But to a select few, it is the ultimate reality. Intergalactic aliens have arrived on Earth. Now, they move among us. Only one top secret elite group of trained professionals has the ability to detect these extraterrestrial beings. B.A.D. The Bureau of Alien Detectors."
Advertisement:

Bureau of Alien Detectors, or B.A.D., was a 1996 animated series. In it, aliens have invaded the Earth. A carefully selected and trained group of five people called the Phalanx Squad, monitor, control, and battle the alien visitors. But some people in the Bureau may have hidden agendas of their own concerning what to do with the aliens...

For being a kid's cartoon, it had surprising depth to its characters and a well-written plot. It didn't last long, however, only thirteen episodes on UPN Kids.

Compare Men in Black: The Series and Roswell Conspiracies: Aliens, Myths and Legends.