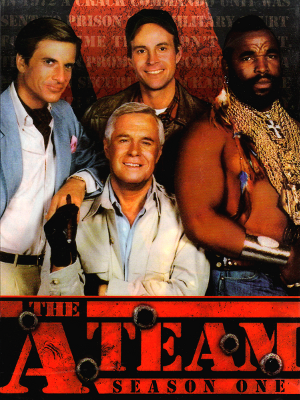 In 1972,note "Ten years ago" in season one a crack commando unit was sent to prison by a military court for a crime they didn't commit. These men promptly escaped from a maximum security stockade to the Los Angeles underground. Today, still wanted by the government, they survive as soldiers of fortune. If you have a problem, if no one else can help, and if you can find them, maybe you can hire... the A-Team.
—Opening Narration
Advertisement:

The four members of the A-Team are:

Each episode would start with a bunch of innocent people being menaced by a bunch of people with guns, who want their land, water, taxi company etc.

They would go talk to a man who they thought would get them in contact with the A-Team. Most of the time, it would turn out to be a member of the A-Team — Hannibal in disguise who had to make sure the people in question are not part of a trap to capture the team.

They would go along to the location of the activity in their Cool Car, which in their case was actually a distinctive-looking custom van — an odd choice for a group who are supposed to be in hiding. There they would do a lot of A-Team Firing, beat up the baddies and often MacGyver up an armored vehicle over the course of an A-Team Montage.

The show ran for five seasons, with several minor cast changes along the way; the show's eventual decline was attributed to the constantly-recycled and extremely formulaic plot. Attempts to win viewers back, by both changing the overall premise and having the A-Team overseen by a former antagonist, worked for only a short while.

Logic and credibility were usually ignored for the series' trademark over-the-top explosions, but the show never took itself particularly seriously, anyway: most of Hannibal's disguises were paper-thin, the villains were usually mostly-inept and somewhat one-dimensional, and the weapons that the Team cobbled together from miscellaneous parts were invariably more effective than the machine guns that the episode's villains used.

A big-screen version was released in June 2010, with Liam Neeson, Bradley Cooper, Sharlto Copley and Quinton Jackson as the team. The trailer can be seen on YouTube

. Tropes go to the respective page.

The A-Team provides examples of the following tropes:

While the A-Team rescues the real bride, Murdock takes her place.

Example of:
Bride and Switch

While the A-Team rescues the real bride, Murdock takes her place.