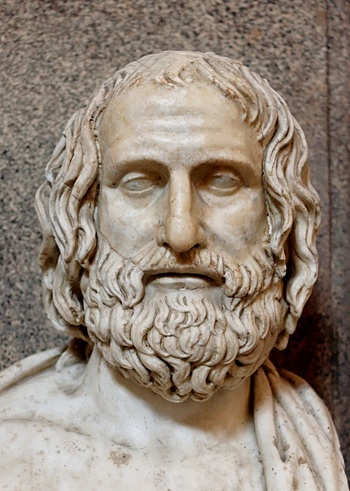 Euripides (circa 480 – circa 406 BC) was a playwright of Ancient Greece (5th century BC), one of three great tragedians whose works have survived to the present day (the earlier two are Aeschylus and Sophocles). A whopping eighteen of his plays have survived complete (many via a remarkably-preserved 800-year-old copy of The Complete Works of Euripides — Volume 2: Eta-Kappa, although the Theta plays remain lost), along with fragments of many others. One of these, Cyclops, is a Satyr Play about Polyphemus.

His works are noted for having subtler and more realistic characterization than his predecessors, having women as major characters with the complexity and subtlety far superior than his predecessors and fellow writersnote To the point there is a saying that if the work doesn't have a major female character, it can't be from Euripides. and for playing with the established tropes of Greek tragedy. On the other hand, Friedrich Nietzsche condemns Euripides for being in thrall to Socrates' philosophy, saying that Euripides "killed" tragedy by infusing it with reason and philosophical ideas.

Any discussion of Euripides has to make note of the fact that he had a polarizing reputation during his day. Euripides was well aware of the constraints placed upon playwrights at the time, and many of his plays attempted to subvert at least one of the established theatrical conventions. Breaking conventions made him divisive among both public and the critics. In general, he had a better popular than a critical reputation. He was parodied in Aristophanes' The Frogs where he was compared unfavorably to Aeschylus. Nonetheless, today, some scholars regard him as the best, and certainly the most modern, of the three surviving Greek playwrights and several regard him as the Shakespeare of Athens.

Other works by Euripides provide examples of: