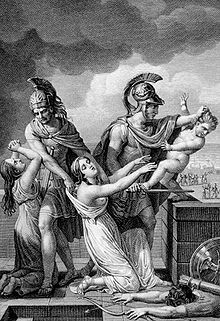 In a world where history is Written by the Winners (especially in 415 BC Athens) Euripides chooses instead to focus on the fates of the losers, giving A Day in the Limelight to the miserable Trojan women as their city has been sacked, their men killed and they're going to be enslaved by the winners.

The women who have a prominent role in this tragedy are exactly those who were mourning Hector at the end of The Iliad - Hecuba, Andromache, Cassandra and Helen. Since they are Royal Blood and they are the losers' women, each of them has been destined to a different Achaean general - Hecuba will be taken away by Odysseus, Cassandra by Agamemnon, Andromache by Achilles' son Neoptolemus, while Helen has been sentenced to death by her estranged husband Menelaus. From Bad to Worse, horrible news are yet to come: Andromache and Hector's son Astyanax has been condemned to die, because the Achaean leaders are afraid that the boy will grow up to avenge his father and would not take that risk. The boy will be thrown off from the battlements of Troy.

Meanwhile, goddess Athena, once protectress of the Achaeans, is enraged by Ajax the Lesser's rape of Cassandra, which took place while she was seeking shelter in Athena's temple and was embracing her statue (a unforgivable act of blasphemy, according to the customs of that time). Because of this, and the generally bad behaviour of the Greek army, she has decided to team up with Poseidon (once her archenemy) to make sure that the Achaeans would have an awful return journey... but that's another story.

The Trojan Women was the third tragedy of a trilogy about the Trojan War, which included Alexandros - featuring the recognition of the abandoned Trojan prince Paris, and then Palamedes, which featured the Achaean mistreatment of their fellow Achaean Palamedes. The tragedy is one of the earliest examples of War Is Hell, as narrated through the eyes of the innocent civilians who end up losing everything they hold dear, and also the barbaric treatment of the spoils of war by the winners. Unfortunately, that's a theme still relevant in our days - that's why The Trojan Women has aged so well, and is still a source of endless debate and adaptations, each with their own outlook on war and of course their Reality Subtext about each authors' historical context.

If you like, read the English version of the Project Gutenberg here

. There is also a fairly good adaptation of The '70s with an All-Star Cast: Katharine Hepburn as Hecuba, Vanessa Redgrave as Andromache, BRIAN BLESSED as Talthybius, Geneviève Bujold as Cassandra and Greek actress Irene Pappas as Helen.