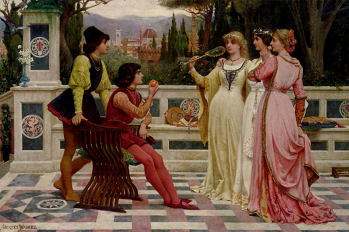 The Judgement of Paris is a popular topic for artists in classical and renaissance period. The story itself is part of the background of The Iliad and connected to the story of the original Apple of Discord. In order to not make the decision himself, Zeus gave the decision of whom to give the Apple of Discord to Paris. He had to choose out of Hera, Athena and Aphrodite.

This common scene is of the three goddesses, led to Paris by Hermes, trying to bribe Paris as he makes his decision. The artist normally gives each of the characters some signifying objects. Paris was a shepherd at the time, so he will have a shepherd's crook. In later artwork, he often wears a Phrygian cap due to being from there. Hermes, the messenger god, will have his caduceus and winged sandals. Hera was symbolised by the peacock and Athena was distinguished by her armour, including a shield bearing the head of Medusa. Many times the artist will depict the goddesses nude; if so it is one of the few times the chaste Athena will be depicted as such.

Aphrodite was the eventual winner and goddess of beauty, love and lust. She won by bribing Paris with the most beautiful woman in the world, Helen (she was married to someone else, but surely that's not going to cause any long-term problems). Correspondingly, she is often shown being the happier of three (the other two will be looking away or standing apart) and she will be attended by her son Eros/Cupid. The apple may be in hers, Hermes or Paris's hand.

The appeal of this subject matter to the artists is simple: Tits. You were allowed to depict ancient Greek deities as nude, especially when they are trying to hit on a simple shepherd to win a prize. In a way, it's the "pizza delivery boy needs a tip" of high art. Ancient works would save bare breasts for just Aphrodite since the point was that she wasn't necessarily most beautiful, but the sluttiest—and they were all trying to bribe him, not give him a flash.

Has nothing do with the judicial system in a French city, or with a 1976 blind taste test that saw California wines rated better than French ones in the same French city