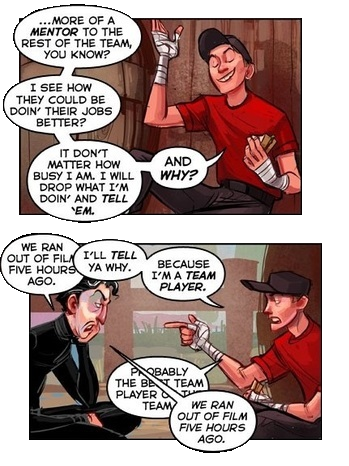 of pure speech later] — will never live for the sake of another man, nor ask another man to live for mine."
— John Galt, Atlas Shrugged
Advertisement:

This trope happens when a character has started talking and just... won't... stop. Discussing and ranting for far longer than any normal person who's not a college sophomore would, they launch into well thought-out and outlined philosophical essays, complete with introductions and supporting points. Something any normal person might take weeks to write, rewrite, and organize before presenting, this character seemingly makes it up off the top of his head.

Not only is the length of the speech generally unrealistic (provided that the scene is not in court or during a speech, when it is usually acceptable, or in a situation where a character's only viable option is to stand up and just keep talking), the audience is amazingly quiet: never interrupting or leaving, and even remembering specific points during their speech. Bonus points if no real time has seemed to pass (for example, it is still before breakfast when the discussion has ended, when it easily took over an hour to read). In literature, this is indicative that the work was probably written in the Victorian era.

When the character is explaining the author's views, it's also an Author Filibuster. Compare Speech-Centric Work for works which feature a great amount of dialogue or monologue, and which may feature not just one but several of these. See also Realistic Diction Is Unrealistic and Talking Is a Free Action. And God help you if this trope overlaps with Motor Mouth. When a character is filibustering for an in-universe reason, they are Holding the Floor. Usually becomes a Wall of Text if used in a comic. Can be a Fridge Logic result of a story having an orally-based Framing Device — "Wait, is he still telling this tale to the guys round the campfire? How did he pronounce the chapter breaks?"note One way would be that this would be a break for the storyteller/listeners to go to the bathroom, sleep, eat, etc., or that that was simply the amount of story told each evening — so the first campfire we see and the last are 30 chapters/days apart.

This trope is often considered to be a writing pitfall, but not always. After all, the opinion any specific reader has of any Character Filibuster is usually ("usually" being the key word here) a product of whether or not the reader agrees with the point being made, or if the point being made is petty enough to be funny.