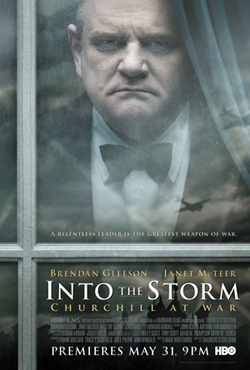 "We shall never surrender."
"Let us follow, steadfastly together, into the storm and through the storm.
— Winston Churchill
Advertisement:

Into the Storm (also known as Churchill at War) is a 2009 made-for-TV biopic (co-produced by The BBC and HBO) that showcases Winston Churchill's career as a Prime-Minister across the Second World War, as well as his relationship with his family and his friendships with politicians of the world. The film essentially intercuts scenes showing Churchill's most legendary moments as a politician with his (often troubled) relationship with his family (particularly his wife, Clementine), who have to deal with his harsh personality.

In short, the film niftily sums up who Winston Churchill was in detail, showing many of his qualities and many his flaws.

Brendan Gleeson received widespread acclaim for his portrayal of Winston Churchill, including from Churchill's own daughter.

It is also a loose sequel to an earlier movie about Churchill (The Gathering Storm, about Churchill's wilderness years before the War), but it features none of the cast and production staff of the former, although they have the same producer and screenwriter (respectively, Frank Doelger and Hugh Whitemore).

Not to be confused with the tornado movie released in 2014.