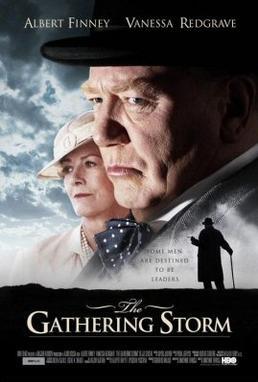 The Gathering Storm is an award-winning 2002 BBC-HBO TV film about Winston Churchill in the years leading up the Second World War, starring Albert Finney as Churchill and Vanessa Redgrave as his wife Clementine.

The film tells of how Churchill came up from the political wilderness in the early 30s to a position of much more prominence by 1939, by leading the opposition to the appeasement policies of Stanley Baldwin (Derek Jacobi). He was able to do this by being secretly passed classified information about the German military build-up by a source in the Foreign Office, Ralph Wigram (Linus Roache), with the complicity of military intelligence official Desmond Morton (Jim Broadbent), and despite the watchful eye of Wigram's boss, Sir Robert Vansittart (Tom Wilkinson), who is actually against appeasement but who couldn't approve of what Wigram is doing. Meanwhile, the exasperated Baldwin gets underling Ivo Pettifer (a fictional amalgam of various people, played here by Hugh Bonneville) to find out who's passing Churchill classified stuff and get him to stop doing it. Pettifer puts pressure on Wigram's wife Ava (Lena Headey) to get her husband to stop doing what he's doing, but she refuses.

Meanwhile, Churchill has to deal with his chronic lack of money and the activities of his useless son Randolph (Tom Hiddleston), who's unsuccessfully trying to get his own political career going.

Eventually, the strain of covertly feeding Churchill information is too much for Wigram and he unexpectedly dies. However, Churchill's warnings are borne out by developments, and the film ends with him being appointed to Neville Chamberlain's war cabinet as First Lord of the Admiralty.

The Gathering Storm provides examples of: