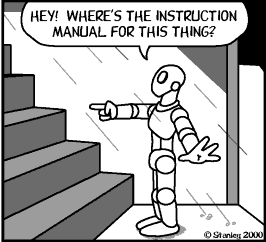 "I always take the elevator. I don't have any stair drivers installed."
"There's no stopping us now, Minion! Together, we shall free Pandora! I will lead you into battle! I will destroy Handsome Jack with my bare hands! I will..."
[doors open to reveal a huge expanse of stairs, which Claptrap can't follow you on]
"STAIRS?! NOOOOOOOOOOOOOOOOOOOOOOOOO!"
— Claptrap, Borderlands 2
Advertisement:

Stairs are one of the oldest human inventions, and one that tends to be suited uniquely to a creature with multipedal locomotion using legs of roughly human length. Creatures with differing forms of locomotion sometimes have... trouble with them. Hence this trope.

For some reason, this is often the case with hostile robots, but it's not required to be either hostile or a robot to count as this trope, just a creature or device that logically will often be called upon to deal with stairs, yet has a great deal of trouble navigating them.

Bonus points if the creature attempts to navigate the stairs anyway, resulting in a Staircase Tumble. Extra bonus points if it's actually destroyed in the resulting fall, or disabled so thoroughly that The Hero can dispatch it at his leisure.

A subtrope of Weaksauce Weakness.