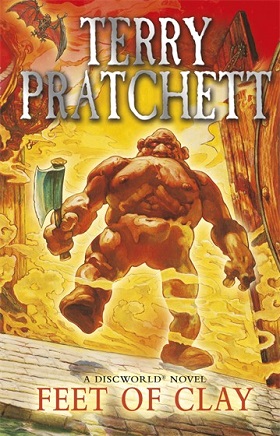 A Discworld Whodunnit. Who's murdering harmless old men? Who's poisoning the Patrician? As autumn fogs hold Ankh-Morpork in their grip, the City Watch have to track down a murderer who can't be seen. Maybe the golems know something - but the solemn men of clay, who work all day and night and are never any trouble to anyone, have started to commit suicide...It's not as if the Watch hasn't got problems of its own. There's a werewolf suffering from Pre-Lunar Tension. Corporal Nobbs is hobnobbing with the nobs, and there's something really strange about the new dwarf recruit, especially his earrings and eyeshadow. Who can you trust when there are mobs on the streets and plotters in the dark and all the clues point the wrong way? In the gloom of the night, Watch Commander Sir Samuel Vimes finds that the truth might not be out there at all. It may be in amongst the words in the head. A chilling tale of poison and pottery.
Advertisement:

The 19th Discworld novel and the third in the City Watch theme. It has one of the more conventional plots of the series, but executes it very well in the inimitable Pratchett style.

The newly boosted and renewed Watch from Men at Arms is back, and Vimes is settling into his role as Commander and a knight. But the life of a Watchman is never boring. Two mysterious murders - one in the dwarf community and one in the ecclesiastical - happen one after another. Are they linked? Perhaps to a golem - those stolid ceramic workers who have no voice? And are any of them associated with Lord Vetinari's sudden illness, possibly by poison? And is Nobby Nobbs really (gasp!) an Earl?

The answers are out there, swirling somewhere in the autumn fog of Ankh-Morpork...

Preceded by Maskerade, followed by Hogfather. Preceded in the Watch series by Men at Arms, followed by Jingo.