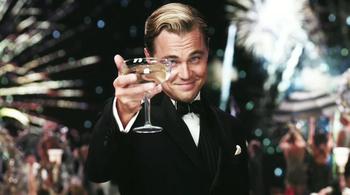 What all the rich people did during Prohibition
"Mm, here we go. 72-year-old Scotch. It'll be lost on you, but one day, you'll appreciate it."
— Joan, Zoey's Extraordinary Playlist
Advertisement:

They have power, wealth, and style. Alice prefers champagne, martinis, liqueur, and fine wines. Bob leans in the direction of whisk(e)y or brandy. Alice can typically be seen lounging around in long luxurious gowns and sipping absentmindedly at her drink while Bob pours himself a glass, typically "neat" or "on the rocks," after a hard day and sits down to dwell in his thoughts.

The character is not depicted as an alcoholic of any degree — they do not need to drink, they merely find it pleasant. They can also afford liquor that's good enough to drink without a mixer and is meant to be savored rather than gulped. Combined with tranquil indoors imagery of a wealthy home, comforting silence, and solitude, the drinking scene will have the audience know that the character lacks nothing in this world.

As one alcohol expert put it

, "The truly rich people I've seen while working drank whatever they felt like, and beer was one of the relatively common options. But high-quality, expensive liquor or wine visually communicate affluence better than beer does, so that's what you see 'rich people' on TV drinking."

In short, having an expensive taste in alcohol and the ability to sip it whenever you please is a good visual representation of wealth, an example of Conspicuous Consumption.

The trope most likely comes from Britain; starting in the Middle Ages, wine was the drink of the rich nobles (as it had to be imported from the Continent, usually from France), while beer was a common drink (made locally with local ingredients). Similarly, distilled liquor was initially always imported to Britain, as distilling technology didn't make it to the British Isles until the late 14th to early 15th century. Even after that, distillation technology was initially quite expensive (requiring you to burn a lot of fuel to make a fairly small amount of liquor), and the technology needed to make anything actually good was enough to keep it well out of the hands of the common man.

In bars, the expensive liquors are usually diplayed on the top shelves, hence the term, "top-shelf liquor," in contrast to the "bottom shelf" or "well" liquors, the latter term coming from the fact that bartenders have speed wells of lower-quality liquor below the counter for making mixed drinks quickly.

This character is likely to have a Big Fancy House, full of white stuff, and there may be a joke about spilling expensive and colourful alcohol on a more expensive but very white couch. They may have a high-profile job and like to drink hard at work, or may have no job and so the free time to drink all day. Or they might just have enough money to enjoy the finer things in life, and the TV writers know the best way to show, not tell, this characterisation is to give them a crystal glass of scotch.

For the affluent villains taking evil sips of expensive alcohol, see A Glass of Chianti, and for when a classy character is denoted by their knowledge of wine, see Wine Is Classy (though this trope does cover wine examples, as having wealth and having class snobbery are not the same thing). A wine lover who boasts about his/her refined palate as they sip a 1955 Chateau Lafitte likely also shows off on regards to other elements of Snooty Haute Cuisine.

This character may wear a tuxedo and order a martini, but that trope is about Bond expies. Sister Trope to Drink-Based Characterization.