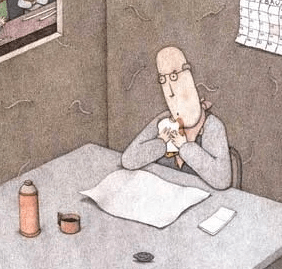 "I have zero interest in food. If it were feasible, my diet would consist entirely of flavorless beige smoothies containing all the nutrients required by the human animal."
— Captain Raymond Holt, Brooklyn Nine-Nine
Advertisement:

While the primary purpose of eating and drinking is to get nutrients, most of us enjoy the taste of food and drink too, which is why we design foods and drinks specifically to be tasty and why things such as condiments and seasonings were invented to liven up food that isn't normally tasty. These people, on the other hand, actually like their food and drink plain. They may also like non-plain foods or drinks too, but sometimes not.

Maybe they're very pragmatic and view eating and drinking as a means for sustenance only, believing trying to make their food and drink tasty, or eating and drinking solely for fun, to be a waste of time. These types might even go so far as to make their own food designed to be tasteless but have all the right nutrients. You might also occasionally run across a whole culture of people like this. If the pragmatist is an old person, they might talk about how when they were younger, everyone ate plain food/drank plain drink and liked it.

They may also simply not know what real fun is. Expect these people to be general bores and possibly even caricatures of a "normal person" or an elderly person. Both these guys and gals and the pragmatists tend to be Comically Serious.

On a darker side, they might have not had much (if any) experience with tasty food and drink before. Maybe they were raised in poverty or incarcerated or something. Or maybe their society was big on convenient nutrition without any sort of flavor. As such, they've grown accustomed to plain food and drink and may find tastier food and drink to taste bad due to not being used to it.

They might be a bit neurotic and believe that any food/drink that isn't plain will make them sick or overweight. These people are often, though not always, hippie types who believe tasty foods and drinks, especially sugar, are terrible for you. This might also be partially justified by having them actually more susceptible to food poisoning due to a compromised immune system, have many food allergies, or whatever. If one of these falls into the "partially justified" category and their reason for having a Plain Palate overlaps with the aforementioned pragmatism, they're often a Sickly Neurotic Geek.

Finally, they might just be a Picky Eater. Seeing as preferring plain food and drink is common for young children, it may be a sign that they're either a child or have childish tendencies.

Regardless of the reason, it can overlap with Only One Finds It Fun (if someone serves up something and only this person likes it while the rest find it boring) and Stock "Yuck!" (for the foods and drinks often considered plain, including vanilla ice cream, bread, water, and oatmeal). Sometimes overlaps with The Teetotaler if the character drinks something like water or milk instead of alcohol, but not all teetotalers drink plain drinks. See also Food Pills, which are barely even food.

A sub-trope of Indubitably Uninteresting Individual.

Wade prefers his food to be room temperature and usually plain.

Wade prefers his food to be room temperature and usually plain.