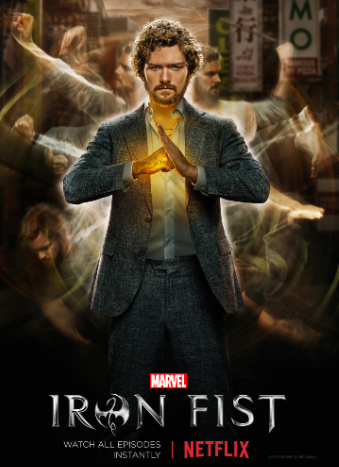 "A child, touched by fire, destined to be our greatest warrior."
"It was selfish and wrong of me to leave without telling you. But coming here has taught me that the Iron Fist isn't just for K'un-Lun. Others before me may have felt it was their destiny... but I am Danny Rand. And I'm the Iron Fist!"
— Daniel Thomas Rand-K'ai / Iron Fist
Advertisement:

Iron Fist is an original series based on the Marvel Comics character Iron Fist. It is the fourth entry in the Marvel Cinematic Universe's Defenders franchise, after Daredevil (2015), Jessica Jones (2015), and Luke Cage. The first season premiered on Netflix on March 17th, 2017.

After his family meets a tragic fate on an expedition in China, Danny Rand (Finn Jones) is adopted by the people of the mystical lost city of K'un-Lun, where he's trained in the ways of Supernatural Martial Arts. 15 years later, Danny returns home to New York City to reclaim his family legacy. Now Danny must fight through the criminals and corrupt who would stand in his way using the awesome power of the fiery Iron Fist.

The second season was released on September 7th, 2018. Simone Missick reprises her role as Misty Knight from Luke Cage, while Alice Eve joins the cast as "Typhoid" Mary Walker, and Raven Metzner replaces Scott Buck as showrunner. A month after season two was released, Netflix officially canceled Iron Fist, making it the first of the Marvel/Netflix shows to come to an end. In February 2022, the series, alongside the rest of the Defenders franchise, exited Netflix's platform, moving to Disney+ the next month.

As Iron Fist is part of The Defenders, spoilers from that series are included in some of the examples, and they are marked as such.

Iron Fist depicts Danny performing his katas as though he is painting with ink.

Iron Fist depicts Danny performing his katas as though he is painting with ink.