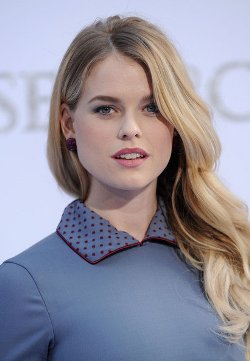 Alice Sophia Eve (born 6 February 1982) is an English actress best known for her roles in the films Starter for 10, Crossing Over, She's Out of My League, Sex and the City 2, The Raven, Men in Black 3 and Star Trek Into Darkness.

She is the daughter of actors Trevor Eve and Sharon Maughan. She studied at the Beverly Hills Playhouse and then read English at St. Catherine's College, Oxford. While at Oxford, she appeared in several student productions such as The Importance of Being Earnest and Animal Crackers (the latter toured to the Edinburgh Fringe Festival). She also appeared in Paul McCartney's music video, "Queenie Eye".

She lives in London and Los Angeles. She has heterochromia; her left eye is blue, and her right eye is green.