Stealing from the Till 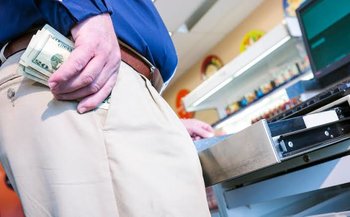 "Take stuff from work.
And goof off on the company time.
I wrote this at work.
They're paying me to write about stuff I steal from them.
Life is good."
— King Missile, "Take Stuff from Work"

It can be as minor as stealing pens to as major as budgeting an entire chunk of the company to fund your own private island. How acceptable the crime is perceived as depends on narrative focus and the relative scale of the theft. If you work at a horrible, soul-sucking job, then it's "okay" to take money out of petty cash to help cover the bills, but your boss wiring money to an off-shore account is not. If you take supplies rather than cash, that's even less frowned upon, because the company was expecting it to be used, right? (Similar logic applies to Stealing from the Hotel.) Large-scale schemes to defraud people are almost always seen as a worse crime than other kinds of theft, not just because of the number of people ripped off, but because of the breach in trust.

The legal term for this sort of behavior is embezzlement

. It is such an ugly word, though.

A subtrope of White-Collar Crime and Inside Job. Compare Stealing from the Hotel and Fake Charity. Not to be confused with stealing something from Till Lindemann.