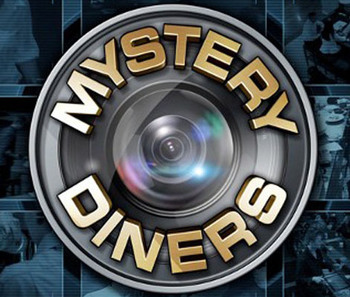 Mystery Diners is a Food Network show that ran from 2012 to 2016 where, in the vein of fellow Food Network series Restaurant Stakeout, host Charles Stiles and his team of Mystery Diners are called upon by restaurant owners around the country who are concerned that employees at their restaurants are causing trouble or stealing things and want to find out who and why. Hidden cameras and the eponymous "Mystery Diners", actors who pose as diners or new employees at the establishment, are used to discover the bad employees as Charles and the owner(s) watch via CCTV from a nearby control room.

The Consultation: Charles and his team meet up with the restaurant owner(s) who has asked for their help. The owner expresses his concerns about certain employees who he/she suspects are not taking their job seriously, are causing messes, stealing money or other things, etc. at the restaurant. It's at this point hidden cameras are set up around the establishment. This phase is invariably preceded by The Advert, in which this week's restaurant owners are allowed a minute or so of free prime airtime to showcase the food they do best, and present their House Special.

The Sting: Charles and the owner(s) sit in a nearby control room to watch and listen to the action via closed circuit television and audio wiring. The Mystery Diners step in either as customers or new trainees to get the lowdown on the suspected employees.

The Confrontation: When the owner(s) is allowed to do so or if they've had enough of the employee's trouble-making, they bring the suspected trouble-making employees to the control room to show them that the owner(s) have seen their behavior. Usually the bad employee or employees get fired, though sometimes they'll get a stern talking-to and keep their employment. Sometimes suspected employees that turned out to be good eggs after all are also brought to the control room, where the owner(s) congratulate them for their good behavior.

After this, a "Where Are They Now?" Epilogue detailing how the restaurant, owner(s), and employees (both former and current) are coming along since the Mystery Diners' visit.