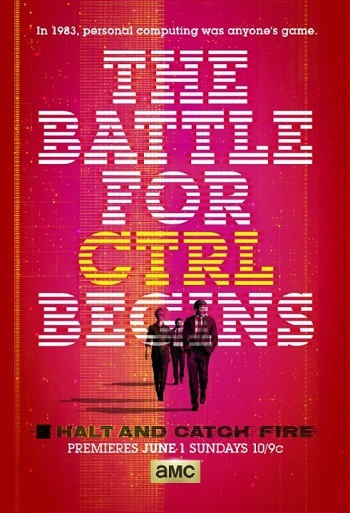 "Computers aren't the thing. They're the thing that gets us to the thing."
—Joe MacMillan

Halt and Catch Fire is an American television series that aired on AMC from 2014 to 2017.

In the first season, set in 1983, Joe, Gordon, and Cameron, as employees of a small Dallas-based system software firm called Cardiff Electric, set out to create a revolutionary IBM PC clone which is smaller, faster, more powerful, and more affordable than the original. While designing the machine, the team must deal with the tension of their personal and professional issues as well as the threat of the machine never making it to market.

Season 2 took place one year after the events of the finale of Season 1, mainly focusing on Cameron's startup company, Mutiny. She and Donna faced threats, both new and familiar, which could have been the company's undoing. Season 3 saw the Mutiny crew seeking a fresh slate in California's Silicon Valley, hoping to become the next big thing.

The fourth and final season

saw a time shift to The '90s and a focus on the advent of The Internet.

Tropes aren't the thing. They're the thing that gets us to the thing: