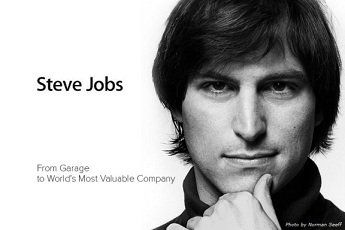 "Your time is limited, so don't waste it living someone else's life. Don't be trapped by dogma — which is living with the results of other people's thinking. Don't let the noise of others' opinions drown out your own inner voice. And most important, have the courage to follow your heart and intuition. They somehow already know what you truly want to become. Everything else is secondary."
— 2005 Stanford University Commencement Address
Advertisement:

Steven Paul Jobs (February 24, 1955 — October 5, 2011) was an American inventor, film producer and business executive who pioneered much of the popular penetration of personal computers and their related applications in popular culture.

Although a post-secondary dropout, Jobs's flair for technology and how to design and market it combined with the technical mastery of his partner, Steve Wozniak, helped create Apple Computer in 1976, starting with the Apple I

, whose introductory sale price was $666.66, because Wozniak liked repeating digits, and the price was a 1/3 markup from $500.00. From that partnership, Apple grew to be a major player in the embryonic consumer market with innovative products like the Apple ][ and the Macintosh.

However, Jobs' abrasive personality and stubbornly selective acknowledgement of reality alienated much of the staff and management. This extended before Apple such as when Jobs was at Atari, he got the job to create the classic game, Breakout, only to convince Wozniak to do the major programming work and secretly kept most of the bonus money for himself. Eventually Apple's market difficulties in the mid-1980s enabled the Apple board to have him Kicked Upstairs - he was still the chairman of the company, but was stripped off all decision-making powers and assigned to an almost-empty building instead. Jobs was not fooled by this move and after a losing power struggle to prevent this, he quit.

On his own, Jobs founded the NeXT computer company, which struggled under his exacting design specifications and slow sales of PCs that proved to be ahead of their time in many respects. The lasting legacy of NeXT included British scientist Sir Tim Berners-Lee using one of their computers to develop first World Wide Web browser and server, and the company's operating system, NeXTSTEP, becoming the basis for classic Mac OS's replacement, Mac OS X (now known as macOS), as well as Apple's subsequent operating systems iOS, watchOS and tvOS.

Along the way, Jobs also purchased the computer graphics organization, The Graphics Group, from George Lucas. This organization was later renamed Pixar and would go under Jobs' corporate management, which helped empower creative head John Lasseter's artistic direction, to become a major innovator in computer animation and a dominant artistic force in Western Animation, in cooperation with Disney in feature films like Toy Story in 1995.

This spectacular success made Jobs so important to Disney that a crisis occurred when the company CEO, Michael Eisner, insulted Pixar, and by extension Jobs, in 2003 when he publicly denigrated the upcoming film, Finding Nemo, as a sure flop bound to take them down a peg. When that film became yet another critically hailed smash hit that topped all the others just as Pixar's contract with Disney was about to expire, Jobs, who loathed Eisner even before that insult, was ready to walk away and entertain the certain flood of offers with rival film companies. To prevent that corporate disaster, on top of other complaints about Eisner's arrogant incompetence, Disney investors rose up to fire Eisner in part to placate Jobs. Furthermore, when the new CEO decided to then outright purchased Pixar as a subsidiary in 2006, Jobs became the single biggest shareholder of the corporation while Lasseter was put in charge of all of the company's animation.

In 1996, NeXT was bought by Apple and Jobs returned to the company to find that while he was gone, several CEOs came and went as multiple failing product lines had drove the company on its way to bankruptcy. Now under his control again, the company soon prospered with the iMac computer line, but also branched out into new products that made a deep impact in pop culture. Jobs oversaw the creation of the iPod MP3 player that became the pre-eminent example of a new music market, which was complemented by the iTunes Store that redefined online media retail, while he also manipulated desperate companies in the sagging music industry to cooperate in an arrangement shamelessly stacked in Apple's favor.

After these successes, Jobs' prescient technology business sense and his almost obsessive commitment to innovative design led to further groundbreaking products. These included the iPhone, which opened the smartphone market from a business-oriented one to a general consumer item, and the iPad, which similarly kickstarted the tablet PC market largely by itself.

However, his stubborn personality and eccentricities also led to him not properly dealing with his declining health, leading to him officially departing Apple in August 2011. Six weeks later on October 5, 2011 Jobs collapsed at his Palo Alto home and died of pancreatic cancer. He was 56 years old.

Steve Jobs has been hailed as one of the great American business innovators and leaders of modern times, with a popular culture impact at least as profound. For instance for his work running Pixar, Jobs was listed in the Academy Awards In Memoriam montage for the year of his death and is officially honored as a Disney Legend of that company's history.

Jobs has had a ton of documentaries and at least four Biopics made about him: the first being a 1999 TV docudrama, Pirates of Silicon Valley, starring Noah Wyle and focusing on his rivalry with Microsoft co-founder, Bill Gates; a 2013 indie film entitled Jobs starring Ashton Kutcher in the title role; the 2015 Danny Boyle film, Steve Jobs, based on the biography of the same name with Jobs being played by Michael Fassbender, and Steve Jobs: The Man In The Machine by CNN Films.