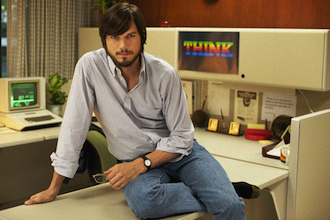 Jobs is a 2013 Biopic about the life of Steve Jobs, founder of Apple Computers, starring Ashton Kutcher as Jobs and Josh Gad as Apple's co-founder Steve Wozniak. It was directed by Joshua Michael Stern. It tells the story of Jobs' life from when he was a college student in 1974, to the founding and growth of Apple Computers, to Jobs' involuntary departure from Apple, to his return to Apple in the 1990s.

Compare Pirates of Silicon Valley, another film about the early days of Steve Jobs and Apple—as well as Bill Gates and Microsoft.

Another biopic, Steve Jobs, based on his biography of the same name, was released in 2015. It is directed by Danny Boyle, written by Aaron Sorkin and stars Michael Fassbender in the lead role (after a few actors dropped out) and Seth Rogen as Steve Wozniak.