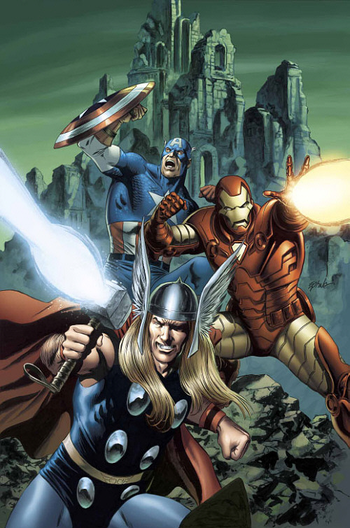 A trichotomy of character/faction archetypes that expands the Magic Versus Technology dichotomy with the Charles Atlas Superpower: one archetype learns magical spells, another builds crazy gadgets, and the third perfects their own body to reach levels of personal power comparable to the first two. They may be standing against each other in a triangle of Tactical Rock–Paper–Scissors, or they may instead be part of the same team/group, using their distinct set of abilities to solve various problems together. In games, they can form the basis of a Three-Stat System.

The "strength" character/faction may symbolize people with low-to-mid technology and looking more down-to-earth compared to the magic and tech characters/factions. In a work that employs multiple (humanoid) races, the "strength" faction tend to be normal humans, while elves often represent the "magic" faction, and dwarves, the "tech" faction.

Sub-Trope to Three Approach System. Compare Fighter, Mage, Thief, which can overlap with this trope in various incarnations depending on what they use to fulfill their role in combat. A Fighter usually uses raw physical might and fighting skill, but can also use Supernatural Martial Arts or Full-Contact Magic, or anything from guns and Powered Armor to tanks and Humongous Mecha. A Mage most often uses magic and mysticism to control the battlefield, but they can also utilize Magitek, Sufficiently Analyzed Magic, Nanomachines or drones, or be a mutant, alien or monster whose powers are a part of their innate biology (or be a shapeshifter/beast tamer to make use of those powers). A Thief's toolset can run the gamut from tech gadgets, hacking skills, mechanical traps and explosives, pure dexterity and skill at running, hiding, sniping, archery, knife work and poisoning, or mystical tricks of Teleportation, illusion, concealment and manipulation.