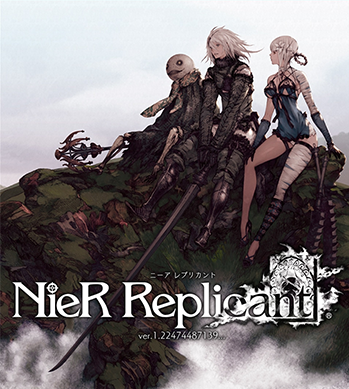 For the sake of one person, he would do anything.
"Our world is dying. Once thriving populations now lie decimated by plague and disease... The end has never felt so close."
— Opening Monologue (Gestalt version)
Advertisement:

NieR (alternately rendered Nier or NIER) is an action/role-playing game developed by Cavia and published by Square Enix, released in 2010 for the PS3 and Xbox 360.

Has two sequels, NieR: Automata (as well as its worldbuilding play series YoRHa) and the Mobile Phone Game NieR Re[in]carnation. A Video Game Remake of Replicant (which also serves its first worldwide release), with the subtitle ver.1.22474487139... (a play on the square root of 1.5) for the PlayStation 4, Xbox One and PC released on April 23rd, 2021.

In 2003, a large, monstrous humanoid creature landed in Tokyo and was killed by a mysterious creature resembling a dragon, before the dragon itself was shot down by the Japanese airforce. In the aftermath, a disease called White Chlorination Syndrome began killing people or converting them into zombie-like monsters, resulting in the near-extinction of the human race. Mankind survives the conflict, but at the cost of nearly all of humanity dying, resulting in the remaining survivors doing as best they can to survive in a world robbed of resources and technology for the next thousand years. Yet the already dwindling population is again under threat from Black Scrawl, a disease that seems to be connected with the malevolent creatures known as Shades. One of the victims is a little girl named Yonah. This is where it gets a bit complicated...

There are two versions of the game, Gestalt and Replicant, and each has a slightly different protagonist. The former is a burly middle-aged man who is Yonah's father, whereas the latter is a slender adolescent who is Yonah's elder brother. Though everything else remains the same, the age gap between the two protaganists produces a different context for the story, with the world-weary father contrasting sharply with his younger, foolishly-optimistic counterpart. Gestalt was released worldwide, but Replicant is Japan exclusive. It should be noted that in Japan, Replicant is treated as the official version, as it was the original and only version planned until the Occidental branch of Square Enix requested an older and more muscular lead for an alternate version.

The protaganist survives by hunting Shades and relying on the charity of his village, but he is powerless to help Yonah. However, after a chance encounter with a talking Spell Book named Grimoire Weiss, he discovers that there may be a cure after all and immediately sets out on a quest to find it, using his newfound Black Magic to cut down anything in his way. During his travels he is also joined by a scantily-clad, foul-mouthed swordswoman named Kainé, and Emil, a lonely young boy with terrible powers.

A DLC package called The World of Recycled Vessel or 15 Nightmares was released May 2010 that included various bonuses. The plot revolves around the death of the protaganist's wife/mother and the cryptic diary entries she left behind.

open/close all folders
#-F
G-L
M-R
S-Z
"Our journey may have been meaningless.
Our past may have been a mistake.
But we're not going back.
Even if this world comes to an end.
Because this... This is the world with the people we cherish."
Feedback