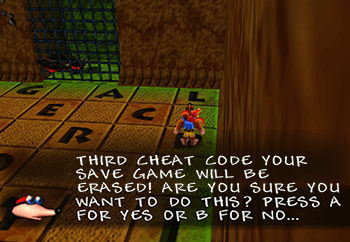 "You didn't listen, I'm amazed, so now your Game Pak is erased!"
Everythin' you've done so far? All that you worked for? Forget about it. That's right. It's all going bye-bye.
— Resetti, Animal Crossing
Advertisement:

You know what the best thing about video games is? The freedom to do whatever you want. You're not necessarily bound to perform the task the game gives you; nothing's stopping you from repeatedly playing that particular minigame over and over again, spending hours fighting irrelevant monsters or even getting yourself into some mischief. While most games attempt to deter you from committing heinous acts by punishing your character in various ways, for some players, it isn't enough. So what if the punishment ends up being that you lost some money, disbarred from a particular location, or even the game straight up killing you? You can regain that money, wait out your sentence, and just restart your game—really, it's no big deal. Even if the punishment were to go further than that, it's nothing a little Save Scumming can't fix, right?

Well, what if the game had the ability to take that away as well?

Here is the last resort of a video game to set you straight: Threaten to delete your save data. It's most likely to catch even the most unaffected player's attention, as this particular punishment violates the secure barrier between game and player. Sure, it seems like a cardinal sin a game designer would put upon a player to actually go that far, but still—the player brought it upon themself.

This trope specifically applies to games that actually have (or fakes) the capacity to erase its own save data (save actually going through the game options and deleting the data through there) as a result of the player's in-game actions.

A lot of games likely won't follow through with it, but would you, the player, actually take that chance?

Compare Final Death Mode, where any death deletes your file, instead of a specific condition.