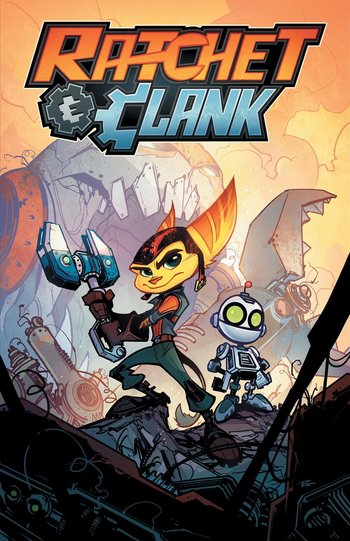 How do you lose an entire planet?
Qwark: ...this is a bit of a bizarre situation. Unprecedented, really—
Ratchet: Bizarre? We once saved a giant clock responsible for controlling the space-time continuum. What could possibly be more bizarre than that?
Qwark: We've been, erm...losing planets.
Advertisement:

Ratchet & Clank is a six-issue comic book miniseries (September, 2010 - February, 2011) within the Ratchet & Clank franchise that connects A Crack in Time to All 4 One. It was written by series veteran TJ Fixman and illustrated by Adam Archer.

Ratchet and Clank have returned to Veldin in the Solana galaxy in order to take some time off after the events of A Crack in Time. However, things begin to get complicated once Galactic President Qwark arrives and explains to the duo that planets from the Polaris galaxy - and even one from the Bogon galaxy - have started to go missing. Despite initially declining to help find them, the two are inevitably thrown into the fray yet again as Veldin itself is stolen and the heroes are captured by a figure known as Artemis Zogg. From there, familiar faces show up to aid Ratchet and Clank stop Zogg as well as uncover what the mysterious "Helios Project" really is.

An paperback Omnibus of all 6 issues was released in July, 2011.

Nothing is impossible! Tropes are merely a matter of time and will!