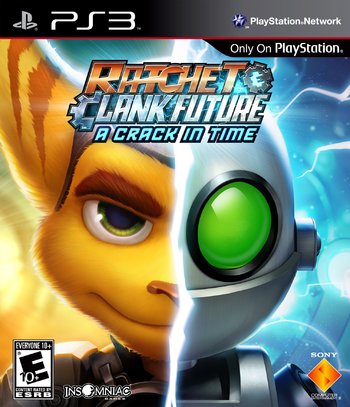 Has time run out for Ratchet and Clank?
"The elders once said time is a living, breathing thing. Powerful, beautiful and oftentimes cruel. It can humble the strongest army, shape mountains to its will, and turn entire oceans to dust. But time itself is not free from jeopardy. There are those who seek to control it, corrupt it, change it to suit their dark will. And if that ever happens, the universe will need a true hero to stop it. Are you ready?"
—General Alister Azimuth
Advertisement:

Dr. Nefarious returns to take control of the Great Clock, a "marvel of science and sorcery" that regulates time throughout the universe, and is located in the exact center of the universe... give or take fifty feet. As in Secret Agent Clank, the duo spend most of the game separated, trying to reunite and stop Nefarious, while they both learn the truth about their respective pasts. Ratchet discovers that he isn’t the last Lombax standing like he once thought when he meets a rebel named Alister Azimuth, who wants to reset time to prevent the purge of his species; meanwhile, Clank discovers that the Zoni are related to Orvus, his true creator and caretaker of the Great Clock.

You'll never take me alive, Qwark! The tropes... are under my control!

"The Clock, much like time itself, is a gift, and not to be tampered with. But like any father, my only wish is that my son does that which makes him feel whole. You are an intelligent and logical being, Clank. But intelligence and logic would have been wasted gifts without honor and loyalty. I am proud to see you came into those on your own. So, should the Clock be too small for your plans, I pray the cosmos light the way towards a future you yourself design. And remember, the universe has a wonderful sense of humor. The trick is... learning how to take a joke! Heeheeheeheehee!"
Feedback

Dr. Nefarious does not simply chew the scenery. He ANNIHILATES it!

Alternative Title(s): Ratchet And Clank A Crack In Time

Dr. Nefarious does not simply chew the scenery. He ANNIHILATES it!