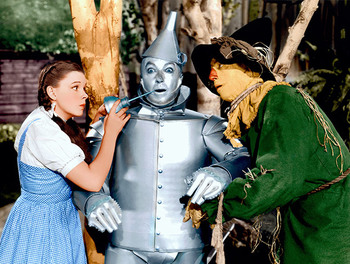 When metal rusts, oxidation converts its ferrous components into a brittle crust of iron oxide that can't be changed back into iron or steel, only chipped away or chemically transformed into black iron phosphatenote Technically, you can turn iron oxide into iron—that's how iron is produced from ore in the first place—but this requires heating it to extreme temperatures in a reducing furnace, which would completely destroy the rest of the item. In video games and some other works, this isn't necessarily true: often, it's a temporary inconvenience that can be set right with a bit of oil. It doesn't matter if the oil in question comes from a machine shop, a lamp, a kitchen pantry, or straight out of the ground. Rub or even just drip a bit of it onto a rusted lock, latch, or other metal gadget, and the device will immediately be restored to perfect working order, gleaming like new. In extreme cases, rusted-out holes and gaps will seal themselves, and even its paint job might be restored.

Probably arises because people conflate oil's use in lubricating jammed or squeaky metal hinges with its use in protecting not-yet-rusted metals from corrosion. Variants in which other substances have an unrealistic restorative effect (e.g. ordinary shoe polish that miraculously repairs cracks and holes in leather) also exist.