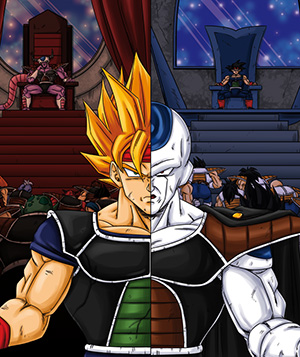 Chapter 36 — The fight of the Fathersnote chapter by Asura & Salagir
Advertisement:

A stock pose that involves either juxtaposing half the face or body of two characters in the middle or putting them beside each other and showing only half of each person.

The purpose of this is to show the two sides of a conflict. Sometimes, characters related to one half are also literally on their side in the character's half of the shot.

Other times, this is just to show that one person has two sides within them. There usually aren't any other characters in this variation if used as a cover or poster.

Besides conflict, it is sometimes simply used to show partners or opposites, like past/future, good/evil, 2D/3D etc. in one shot.

See also Mirrored Confrontation Shot for a similar but conflict-exclusive trope. Compare Versus Character Splash, where two characters' face are briefly shown in a Splash Screen as a prelude to a battle in a Fighting Game; and Fearful Symmetry, where both characters involved are usually shown in profile in an ongoing Blade Lock. Might overlap with Juxtaposed Reflection Poster. See Two-Faced when a character literally has two different halves.