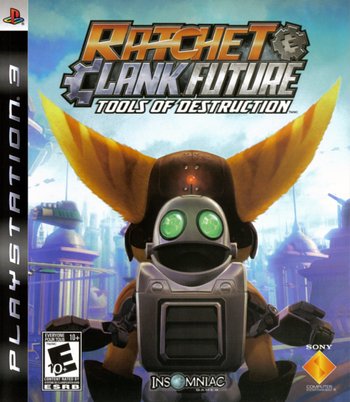 It's a wonderful world. Save it.

"...the first game to truly deliver the long-sought 'You are playing a Pixar movie' experience."
— The New York Times, regarding this game
Advertisement:

The first game of the Ratchet & Clank series to be released on the PlayStation 3, and the fifth mainline game of the series.

The duo faces off against Percival Tachyon, self appointed Emperor of the Polaris Galaxy, who is set upon the extermination of all Lombaxes. Being a Lombax himself, Ratchet naturally doesn't take kindly to that. The game goes a lot into how the rest of the Lombaxes disappeared.

The game was followed by Ratchet & Clank Future: Quest for Booty in 2008.

Emperor Tachyon is an evil little creature with a very high-pitched voice.

Emperor Tachyon is an evil little creature with a very high-pitched voice.