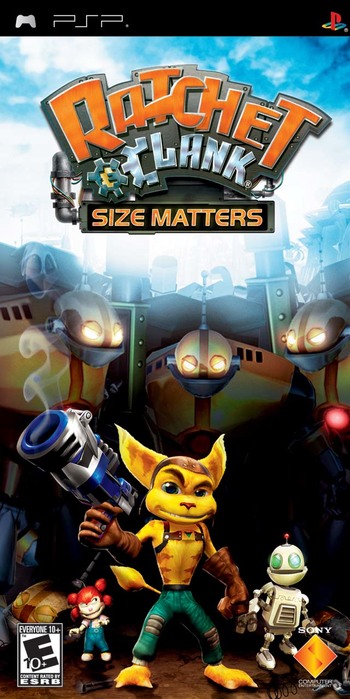 Small enemies. Big trouble.
Clank: This does not seem right. It has been too easy.
Ratchet: Easy?! How's about I ride on your back while you do all the fighting?
Clank: I mean if the Technomites want to stay hidden, they are making it awfully easy for us to find them.
Advertisement:

The fifth-developed game in the Ratchet & Clank series and first on the PSP, later ported to the PlayStation 2, and (technically) the fifth game in the mainline series. It is the first of the two PSP games in the series developed by High Impact Games.

Ratchet and Clank are trying to enjoy some well-deserved time off, only to get wrapped up in another adventure after a little girl named Luna - who claims to have been doing a school report on the duo - gets kidnapped by robots. From there a number of events begin to unfold involving a shrinking device, cloning, and a conspiracy involving a mysterious race known as the Technomites and their leader Otto Destruct, all while Captain Qwark tries to find his long-lost parents.

Looks like Otto overlooked one thing—we're not half as good without these tropes:

"So get your Battle Ratchet today! It's the most realistic fighting toy ever created! (Warning: Battle Ratchet is a living creature that may behave unpredictably. Do not keep Battle Ratchet in original package unless sufficient air holes are provided.)"