It May Help You on Your Quest 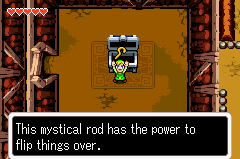 What, you mean I can't do that with my hands?
Jack: ...is the jar of dirt going to help?
Tia Dalma: If you don't want it, give it back.
Jack: [clutches it tightly] No!
Tia Dalma: Then it helps.
— Pirates of the Caribbean: Dead Man's Chest
Advertisement:

A character is handed (or idly picks up, or discovers in his possession) a seemingly useless item of junk. This can happen fairly early in the story — in The Hero's Journey, it's one of the first steps.

Items of this sort are a certain form of Chekhov's Gun.

Especially common in Adventure Games from the '90s, from whence the name was derived.

A Plot Tailored to the Party involving items instead of personality or skillset typically revolves around these.

This is similar to when a character learns a seemingly useless skill or fact that will be needed later on, see: Someday This Will Come in Handy. If an item is elevated to Plot Coupon status, it is because You Will Know What to Do.

Popular items include paperclips and the like, as well as jewelry, perhaps because of its nominal resale value. It could be magic beans, a piece of moldy cheese, etc. If an item is conspicuously clickable, compare Notice This. See also Orphan's Plot Trinket.

If your entire starting kit consists of these items, you may be asked to defeat evil With This Herring.

Common enough that subversions are notable when the item will in fact turn out to be useless junk. Or immediately useful.

A savvy character may fob off an otherwise useless Clingy MacGuffin (or just get the hero to take out the trash) by uttering the words "Take this... it may help you on your quest."

On the other end, it may lead them to grab everything they can so as to be ready for every conceivable challenge or obstacle.

An unusual variant is when the giving character says, "You'll need this more than I do." — common amongst elders who have advanced beyond the need for an item. Compare Grail in the Garbage. Not to be confused with Shop Fodder, which is often only valuable in large quantities. If the item turns out to have sentimental value, it is a Memento MacGuffin.

When the character's whole objective is to obtain or deliver an item, it is a Plot Coupon.

It's dangerous to go alone! Take these tropes!

Alternative Title(s): But Thou Must Take This, Jar Of Dirt, Take This