Film / The Man Who Would Be King 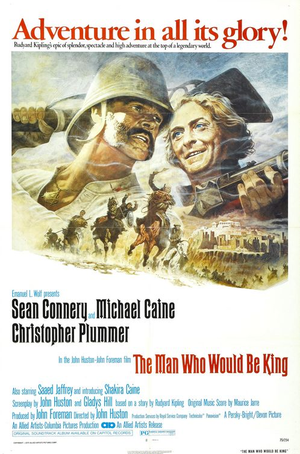 Billy Fish: He wants to know if you are gods.
Peachy Carnehan: Not gods—Englishmen. The next best thing.
Advertisement:

The Man Who Would Be King is a 1975 film, directed by John Huston and starring Sean Connery, Michael Caine and Christopher Plummer, about the glorious and awful sides of European Imperialism. It follows Daniel Dravot (Connery) and Peachy Carnehan (Caine), two former non-commissioned officers of the British Raj, on a journey into the wilds beyond the Khyber Pass and into the lands of Kafiristan on a mission to become kings—or die trying.

Based on a Novelette by Rudyard Kipling (played by Plummer here).

Not to be confused with The Man Born to Be King, Dorothy L. Sayers' set of radio plays about the life of Jesus.