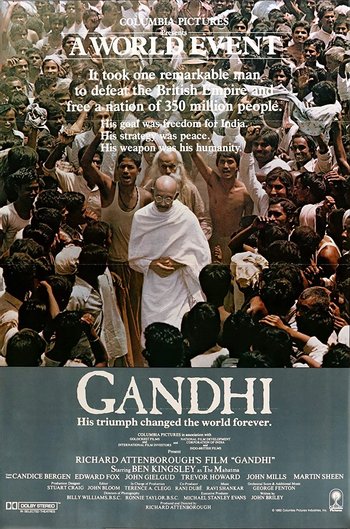 Whenever I despair, I remember that the way of truth and love has always won. There may be tyrants and murderers, and for a time, they may seem invincible, but in the end, they always fail. Think of it: always.
—Mohandas K. Gandhi
Advertisement:

A 1982 Epic Movie directed by Richard Attenborough, Gandhi is the bio-pic of Mohandas K. Gandhi, aka Mahatma Gandhi. The titular role was played by Ben Kingsley in his Star-Making Role. Its story concerns Gandhi as he leads the non-violent fight for India’s independence from the British Empire. Along the way, he earns the respect of much of the world and enemies of all forms.

The story starts in 1948, with Gandhi being assassinated by a Hindu radical for favoring concessions to Pakistan. We then see a flashback to Gandhi as a 24-year-old lawyer in South Africa in 1893. After he is thrown out of a first-class train compartment for having brown skin, Gandhi becomes an activist, agitating for the civil rights of Indians in South Africa. After 20 years in South Africa in which he wins major concessions for the Indians living there, Gandhi returns to India to find himself a hero. He joins the Congress Party campaign for Indian home rule, and eventually becomes its leader, spending thirty years battling the British before finally winning Indian independence. Shortly thereafter, he is assassinated by a Hindu radical for favoring concessions to Pakistan.

This film won the Academy Award for Best Picture, Best Director for Attenborough, Best Actor for Kingsley, and five other Oscars. It holds the record for biggest cast, having around 300,000 people including extras.

Martin Sheen plays an American journalist who reports on Gandhi in both South Africa and India. Candice Bergen is featured prominently towards the end of the film (she is at the scene when Gandhi is murdered) as photo-journalist Margaret Bourke White. A very young Daniel Day-Lewis is onscreen for about three minutes early in the film as an Afrikaner thug who harasses Gandhi on the street. And as everyone knows, the true star of the film was Margaret Bourke White's dubbed cab driver John Ratzenberger.

For the individual, see the page Mahatma Gandhi.

Compare Malcolm X, another biopic about a murdered civil rights activist with a similar runtime (clocking in at just ten minutes longer), released ten years after this one.