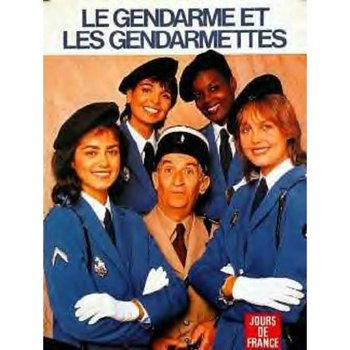 In a movie where society marches on, comedy strikes!
Advertisement:

Le Gendarme et les Gendarmettes (The Gendarme and the Gendarmettes) is a 1982 French comedy film starring Louis de Funès and Michel Galabru. It is the sixth and last installment of the Gendarme de Saint-Tropez series, as well as the last film De Funès appeared in before his death.

Four young and beautiful female gendarmerie officers come to learn from the old gendarmes but it turns out they are coping much better with problems than their teachers (the fact that the entire old male brigade is Distracted by the Sexy doesn't help). Things get hotted up when the "gendarmettes" are kidnapped one by one.