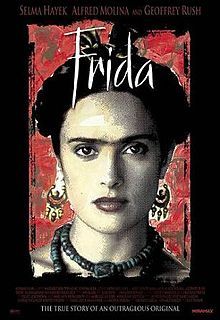 Frida (2002) is a biographical film which depicts the professional and private life of the surrealist Mexican painter Frida Kahlo, portrayed by Salma Hayek (which earned her an Academy Award nomination). Alfred Molina stars as her husband Diego Rivera and Geoffrey Rush played Leon Trotsky.

The movie was adapted by Clancy Sigal, Diane Lake, Gregory Nava, Anna Thomas and Edward Norton (uncredited) from the book Frida: A Biography of Frida Kahlo by Hayden Herrera. It was directed by Julie Taymor. It won Oscars for Best Makeup and Best Original Music Score (recipient: Elliot Goldenthal).