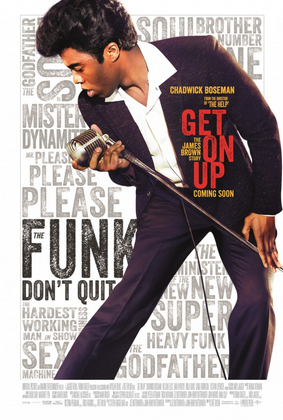 We still got some tropes left in us, Mr. Byrd?
Advertisement:

Get on Up is a 2014 biographical drama/Jukebox Musical depicting the life and career of one of America's most influential entertainers, James Brown. The movie is directed by Tate Taylor, the director of the film The Help, and stars Chadwick Boseman as Brown. The cast also includes Dan Aykroyd, Viola Davis and Octavia Spencer.

The film alternates between segments relaying the stories of Brown's later years, his rise to fame, and his childhood, displaying how he transformed from a poor boy in Augusta, Georgia into one of the greatest names to sweep the country.

Let's bring the super-heavy funk to this tropes section here!