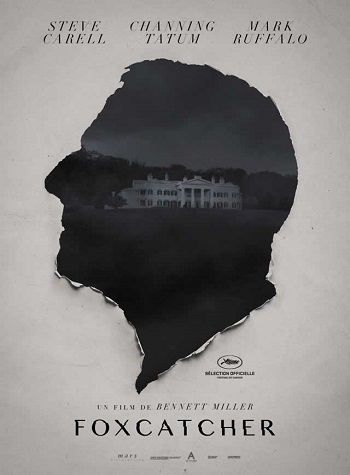 Foxcatcher is a 2014 drama film directed by Bennett Miller and starring Steve Carell, Channing Tatum, and Mark Ruffalo. It tells the true story of the twisted relationship between up-and-coming Olympic wrestler Mark Schultz (Tatum) and reclusive billionaire John Du Pont (Carell), and how the latter's training and sponsorship helped give Shultz a shot at the gold. Not all is well, however, thanks to the shadow of Mark's older brother Dave (Ruffalo), an Olympic champion in his own right, who eventually joins Du Pont's coaching staff. The tension that results eventually leads the schizophrenic Du Pont to murder.

It played on the North American festival circuit before opening in the U.S. on November 14. The trailer can be seen here

Tropes Seen in Foxcatcher Include