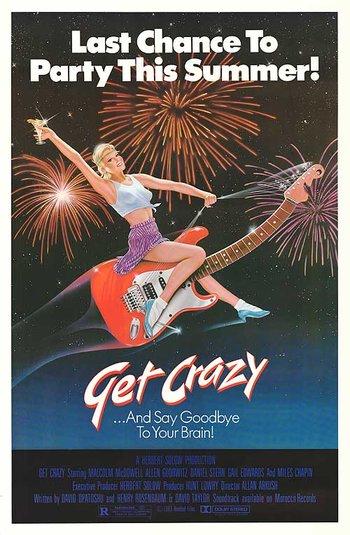 Get Crazy is a 1983 rock and roll comedy from director Allan Arkush that pays tribute to (among other things) his time working the Fillmore Theater as an usher. It stars Malcolm McDowell, Daniel Stern and lots of real-life rock stars (Lou Reed, Lee Ving of F.E.A.R., Howard Kaylan of Flo and Eddie, et al).

After the failure of Heartbeeps, Arkush tried to recapture the musical zaniness of his earlier film Rock 'n' Roll High School while turning the comedy - as well as the Sex, Drugs and Rock & Roll - up to eleven. Executive Meddling (coupled with financiers who allegedly viewed The Producers as a training film!) pretty much killed Get Crazy at the box office. (The Other Wiki

goes into more detail on Arkush's struggles.) Despite its current absence from home video and only occasional appearance on cable, it's developed something of a cult following.