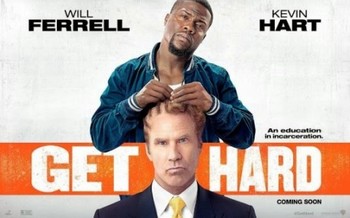 Get Hard is a 2015 American buddy comedy film directed by Etan Cohen (in his directorial debut) and written by Cohen, Jay Martel and Ian Roberts.

James King (played by Will Ferrell), a wealthy hedge fund manager, is engaged to Alissa (Alison Brie), and lives life as a rich millionaire. But he finds his whole life on the verge of collapse when he is accused of embezzling his company's funds. With only 30 days to get his affairs in order before he serves his ten year sentence, he turns to Darnell Lewis (Kevin Hart) to teach him how to be tough enough to survive prison; he needs to get hard. Hilarity Ensues