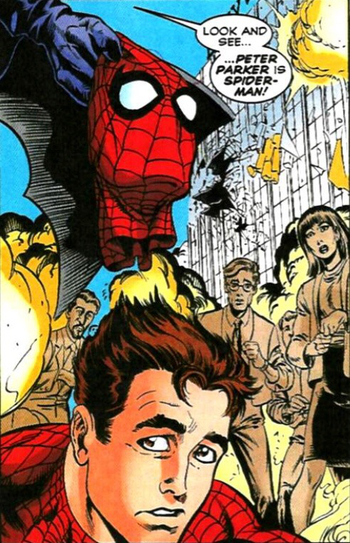 "I'll begin with how I peeled back the layers of [Tim Drake]'s mind. Oh, he bravely tried to fight it at first. You would have been proud to see him so strong. But all too soon, the serums and the shocks took their toll, and the dear lad began to share such secrets with me. Secrets that are mine alone to know... Bruce. It's true, Batsy. I know everything."
— The Joker, Batman Beyond: Return of the Joker
Advertisement:

Never tell a lie, they say, if the truth can cause more damage.

The Masquerade, a Big Secret, a Dark Secret, and other things that you shouldn't know about are serious business. But what happens if your archnemesis, an evil organization, or your evil relative reveals something about YOU? And what would happen if that secret had the potential to blow up all your relationships with friends and allies alike?

Well, you risk letting the bad guy win with style, and you may go from the frying pan into the fire if that secret may trigger a massive Face–Heel Turn and make the supposed villain look like a less flawed character than his or her opponent. In a case of Tropes Are Tools, this trope can also unravel much of a character's unknown Mysterious Past. However, the villain may have been lying all along to make the hero panic and stutter in front of The Cavalry, so be careful avoiding a red herring or blatant deceits. On rare occasions, this may undermine the villain if they reveal too much.

Related to Keeping Secrets Sucks. It's a common way to start The Reveal and, in the worst case, trigger a Domino Revelation and a general What the Hell, Hero?. Compare Villains Never Lie and The Villain Knows Where You Live. Normally, it's this trope that kicks off a Third-Act Misunderstanding and a Liar Revealed moment. Expect the main character(s) to suffer from a massive Heroic Blue Screen of Death in both cases afterwards. This tends to overlap with Wham Line and/or Dropping the Bombshell. See also Just Between You and Me for cases where the villain goes into too much detail.

King Andrias reveals a little something about Marcy.

King Andrias reveals a little something about Marcy.