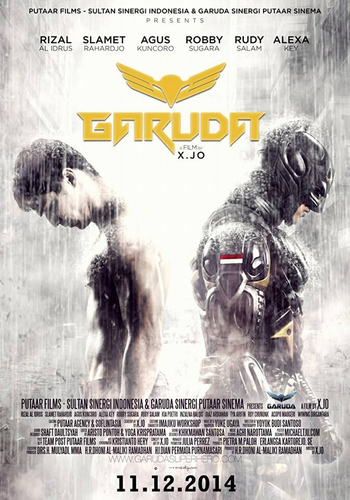 Garuda Superhero is Putaar Film's 2015 Tokusatsu directed by X Jo, with Yoyok Budi Santoso as cinematographer and produced by Dhoni Ramadhan. Created for Indonesian Tokusatsu market following the success of Bima Satria Garuda, this movie is an absolute contrast to The Raid for it's non-grounded action scenes and extremely full-blown usage of bluescreen CGI.

The story opens with the titular superhero defeating an army of nameless aliens, then it jumped back few years earlier when a destructively large asteroid is about hitting earth, things get worse when MAC, the asteroid destroyer device is hijacked by a terrorist group leaded by a man named King, and a young man named Bara (Played by Rizal Al Idrus) is genetically modified by Dr. Cipta (Wiwing Dirgantara) to become the titular superhero to against Durja him and his gang.

Planned to have sequel and the movie wasn't released internationally (yet), but the trailer is available on youtube

, a Malaysian movie released in the same year which has been argued by Rangga Adithia

for having better special effect quality than Garuda and caused a slight flame war between Indonesian and Malaysian netizen, and Putaar film is accused by Robi Baskoro for the movie's laughable amount of plagiarism